The area known as the Village of Whitehouse was occupied by various Native American tribes, including Miamis, Ottawas, Shawnees, Wyandots, and Delawares. During the settlement of the Village, many Native Americans traveled along what is now Weckerly Road to the “Dark and Bloody Ground” in Kentucky from Fort Malden, which is now Detroit. Settlers began to travel west to the Northwestern Territory after “Mad” Anthony Wayne’s victory at Fallen Timbers in 1794. Many of these settlers were of Dutch or German descent and were looking for good farming land, which the area had to offer. The Canal access also attracted many settlers to the area.

The land known as Whitehouse changed owners three times after its first owner sold it in 1842. In 1853, the land was sold to persons associated with the Toledo-Illinois Railroad. Construction of this railroad started in 1853, to connect Toledo to Danville, Illinois through the Maumee Valley and the Great Western Railroad. In 1856, the Toledo-Illinois Railroad was consolidated with the Lake Erie-Wabash and St. Louis Railroad.

It was not until July 5, 1864 that the town plat of the Village was officially recorded. The Village was laid out by John Osborn, a director of the railroad. Edward Whitehouse, Treasurer of the Wabash Railroad, and his wife, along with John Osborn, donated the land for the Village Green. This area is now called Whitehouse Village Park. The Quarry was another cornerstone of development in early days and was opened in 1860. Later, it was filled with water and served as a swimming pool for residents.

Early roads in Whitehouse and the surrounding areas were made of sand, clay, or planks. This made travel very difficult and often horses became stuck in the clay or mud. The early stone roads were Route 2, Monclova Road, and Weckerly Road. When automobiles were invented, this mode of transportation had a difficult time staying on the stone road, and got stuck in the clay ditches.

The Whitehouse Park Statue was dedicated on July 4, 1900 and commemorated those who fought for the United States from 1861-1865. The Statue underwent major renovation in 1979 and now stands fully restored on its pedestal at the Whitehouse Village Park. In the early 1900’s, the Park was also a place where circuses, “medicine men,” and vaudeville shows took place.

The first school in Whitehouse was known as Kent School and was located on the south side of Waterville Street (Route 64), near Cemetery Road. The Noble School and the Burnett School were also early schools in Whitehouse.

The Norfolk & Western Railway abandoned six miles of track between Maumee and Whitehouse in 1989. Earlier that year, the Interstate Commerce Commission approved the abandonment of twelve miles of the same track between Whitehouse and Liberty Center. This rail property has been improved as a bike / walking / jogging trail known as the Wabash Cannonball Trail. It runs through the Village and spans 63 miles and connects 4 counties in Northwestern Ohio.

In 1969, during a demolition of the Standard Oil Company, a log house was discovered near the corner of State Route 64 and Shepler Street. The building, constructed in the 1840’s was moved to this site around 1930. It was covered with siding and was being used as a garage when it was discovered. In 1969, it was moved and placed on Village owned property across the street and in 1970 the Whitehouse Historical Society was formed and placed in charge of its restoration. Currently, it is used by local schools to teach about the history of Whitehouse. The second floor of the house is used as a museum for Maumee Valley historical memorabilia.

For further information on the Whitehouse Historical Society or to become a member, please visit their website at www.whitehouseohiohistoricalsociety.org, or phone 419-877-5383. 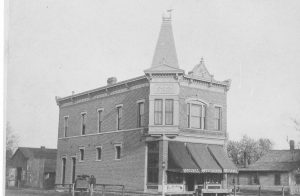